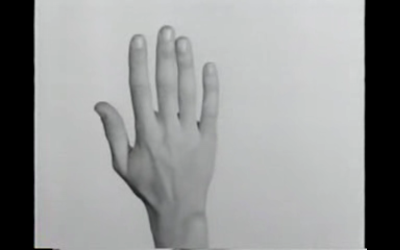 Yvonne Rainer‘s first film, Hand Movie, was shot by fellow dancer William Davis when Rainer was confined to a hospital bed, recovering from major surgery and unable to dance. The resulting five minutes of footage is a sustained close-up shot of Rainer’s hand against a grey background as it stretches and contracts, bends and points, performing the kinds of everyday, quotidian movements that characterize her pioneering minimalist choreography. watch on ubweb.