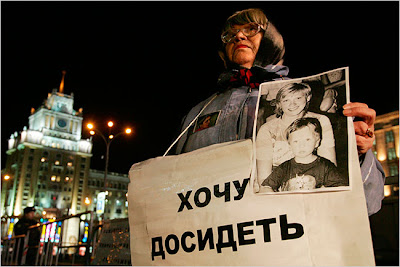 from the front page of the nytimes today: A demonstrator at a rally in Moscow last week holding a photograph of Svetlana Bakhmina, an imprisoned lawyer, with a son. – Dmitry Kostyukov/Agence France-Presse — Getty Images 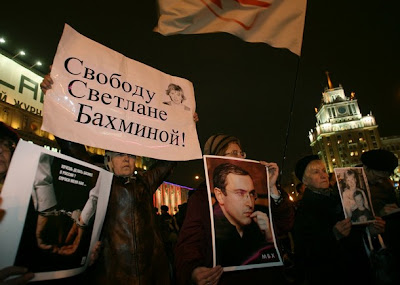 another, from daylife.com – Russian political activists hold pictures of jailed ex-Yukos head Mikhail Khodorkovsky and lawyer Svetlana Bakhmina at a rally in Moscow on October 30, 2008. Dozens gathered to mark Victims of Political Repression Day. The holiday was originally created in the 1990’s to mark the victims of Stalin-era repressions, but has been used by activists to call for the release of those who they consider contemporary political prisoners. The sign reads: “Freedom for Svetlana Bakhmina!”. link