TIME and the TIMES

I was brought to Time’s Light Box by a post on Facebook about this piece: Witness to a Syrian Execution: “I Saw a Scene of Utter Cruelty”. An unnamed (for his safety) photojournalist documented public beheadings in Syria. The first photo is the ‘before’ moment. I have not hit the play button to see the rest. Reading the title and seeing the first image is enough and then reading the article and words by the photographer is more than enough. Why would someone want or need to look at more? Why is there a need to publish all of this?

“Because of the danger in reporting inside Syria, it was not possible to confirm the identity or political affiliation of the victim. Nor are we certain about the motivation of his killers. One eyewitness who lives in the area and was contacted by TIME a week after the beheadings said that the executioners were from ISIS, an Al-Qaeda franchise operating in Syria and Iraq.” Like the NY Times front page of the mass executions by rebels, here again horrific images are published without  specific knowledge. The Times finds out its front page image is over a year old and the correction is buried, not front page news. I feel manipulated. I am troubled by this trend by the big NEWS organizations of getting the “shots”, being the first, etc. This has always been the case with photojournalism but the landscape is different now with social media and everything being filmed or photographed and then being circulated without the facts or without verifiable facts.

Looking at the NY Times image again, I see that we cannot identify those being shot (thankfully) but we can clearly see the shooters. Has this image been their death sentence? Because I haven’t looked at the rest of the Time images, I don’t know whether or not, we can see the faces of the executioners.

Barbie Zelizer writes about ‘About to Die’ Images. From an interview in Slate:  “We’re squeamish because news pictures of the dead and dying are of real people and real events. If a news image works, it penetrates, lingers, forces our attention to the events involving death that it depicts. If a news image works, it doesn’t disappear when we cast aside the newspaper, dim the TV or turn off the Internet. That may be more intrusion than most people are willing to allow.”

These images from Syria haunt me. But are they really news images? What is the news? The rebels are bad too? Many Syrians are barbaric? That the war is horrific? Many questions, no easy answers.

I also have been following Watching Syria’s War  at the Times but interestingly, I  had trouble finding this section – no link from the Crisis in Syria section. If that front page photo of the mass execution had been in these sections, the politics would have been much different since it would be in the context of the difficulty of reporting in Syria and not being able to always know what is going on.

insightful piece from Bag News. As the author notes, it stopped me in my tracks. I was disturbed not just by the content but by the apparent political nature of the Times publishing it and its questionable origin.

Will this Random, Dated Snuff Video Prevent the Attack on Syria? — BagNews.

…[the photo] was from a post at GlobalResearch.com, originally posted at SyrianNews.cc, titled “Will this Photo prevent the Attack on Syria?” If sympathetic to the Syrian government, the post posits the question whether (this) one image could actually prevent the United States from going to war. Citing how of the iconic Eddie Adam photo of a suspected member of the Vietcong being shot in the head crystallized domestic anti-war sentiment, the author applies the same question to the image splashed across five columns of The New York Times… more

And the NY Times correction: An article on Thursday about the brutal and ruthless tactics adopted by some rebel groups in Syria misstated the date of a video that showed a band of rebels executing seven captured Syrian soldiers. The video, which was smuggled out of Syria by a former rebel, was made in the spring of 2012, not April 2013. (link)

A Guide to Watching Syria’s War. 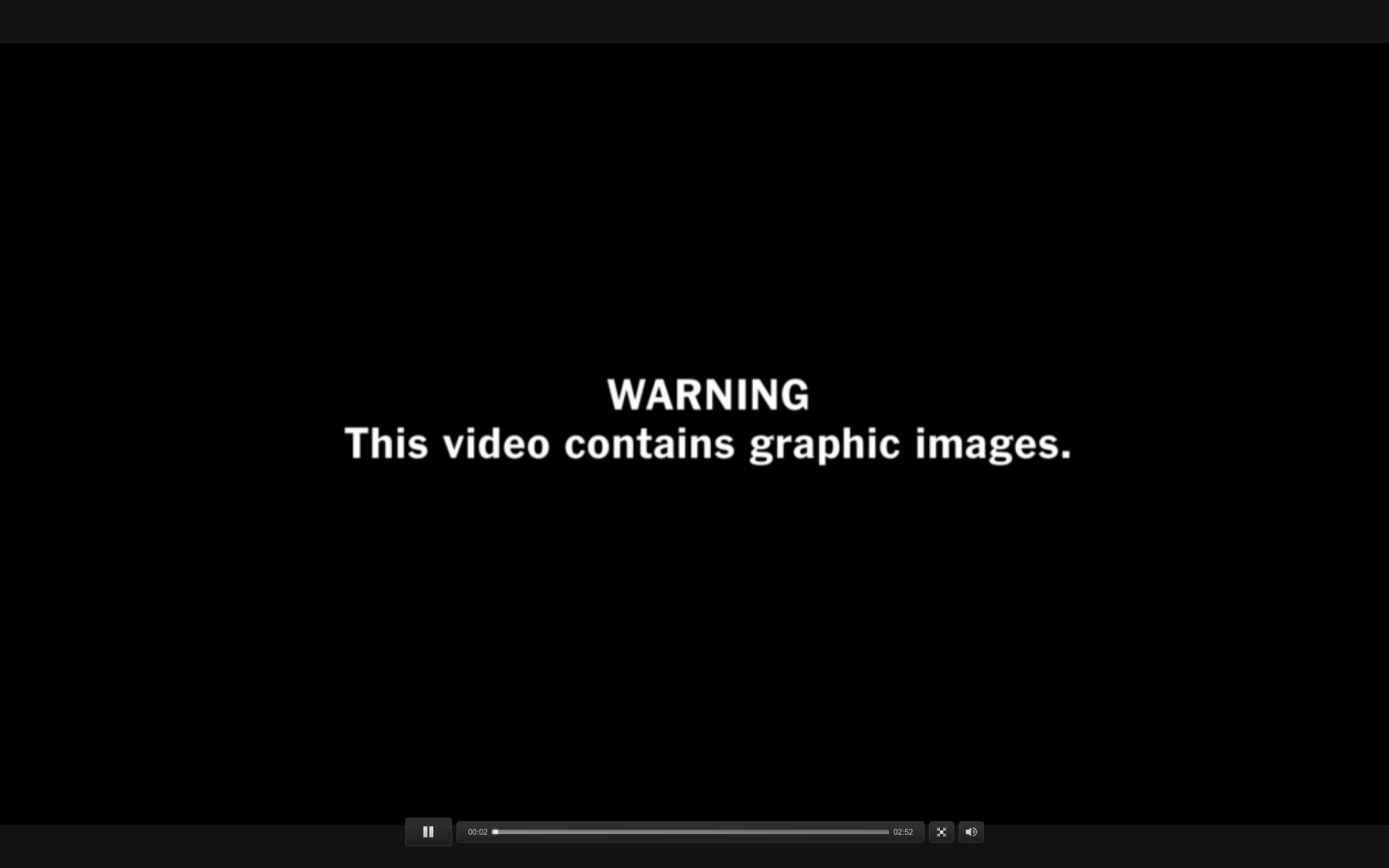 MARCH 18, 2013 By Heather Murphy, NY Times
Amateur video has been pivotal to the way the conflict in Syria is understood.

NY Times video that raises good questions about what do without media. 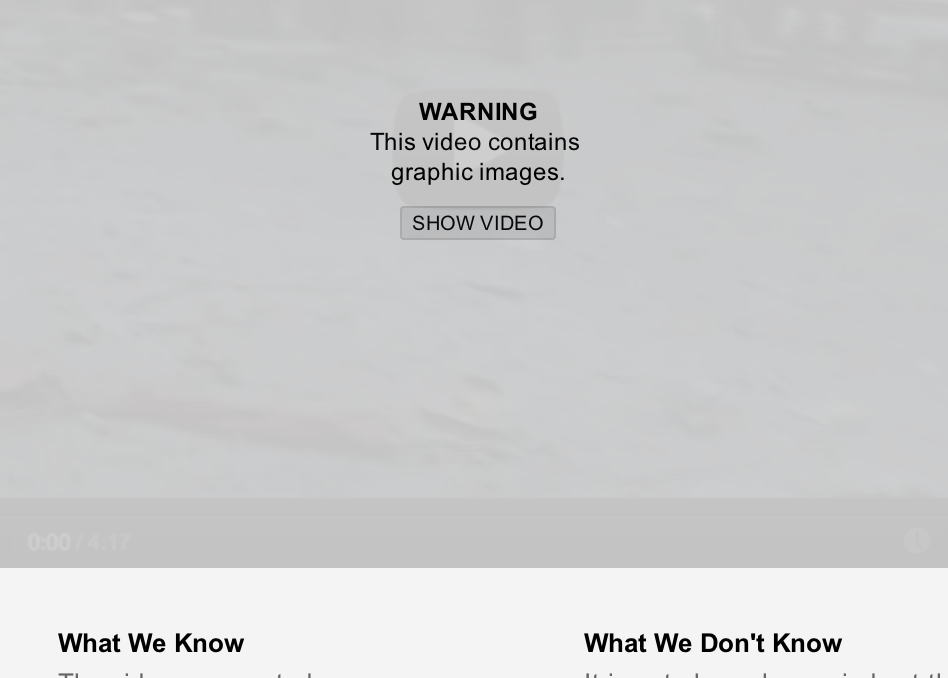 Watching Syria’s War – NYTimes.com Videos and images of the continuing conflict in Syria

The New York Times is tracking the human toll of the conflict in this feature. The primary source is the online video that has allowed a widening war to be documented like no other, and posts try to put the video into context.

** In thinking about these warnings, I realize you are not given an obvious way to skip the image. Most people use the next button and the only way to skip is go to numbers down below to pick the one after next. Also warning never seems to appear in the full screen view.

Looking at the coverage of Marie Colvin and Remi Ochlik’s deaths in Syria.

Ghastly Images Flow from Shattered Syrian City [NY Times] Photo of activist in Homs, Syria, pointing to the bodies of the journalists Rémi Ochlik and Marie Colvin printed very small with no ability to enlarge. 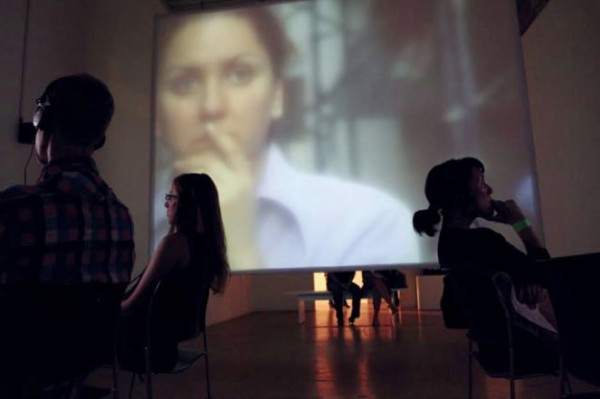 “O’ Say Can You See” Installation by Laura Poitras at CDS
O’ Say Can You See? is Poitras’ first art gallery exhibition. Her installation features a projection of the imagery from Ground Zero in 2001, with audio recorded weeks later at the Yankees’ comefrom-behind Game 4 World Series victory on October 20. Poitras has said that “_O’ Say Can You See?_ returns to the moment of innocence when America waited for the dead to arise. It is a meditation on loss and revenge.” Interviews with recently released detainees from Guantanamo Bay are presented on flat screen monitors, adding new layers of information and emotion about the War on Terror. pdf with more info

The Revolution will not be televised – Gill Scott Herron, 1970

(lyrics)
interesting info on on the song on Wikipedia

Labelle – Something In the Air/The Revolution Will Not Be Televised

Labelle made it their own.

As so many are saying, it may not be televised, but it will be streamed and remixed.
How We Watch, Forward & Remix the Revolution: excellent compilation of videos, photos, and remixes with interesting commentary by Brian Merchant, from the Utopianist, 2.4.11. He and  I looking at many of the same things.

Photos from the Protests in Egypt – NYTImes

Chris Marker — Notes from the Era of Imperfect Memory.

Today I found myself led to Electronic Arts Intermix eai.org which is putting up its incredible archive of video art and also making public a A Kinetic Art: The EAI Archives Online . In searching their catalogue, I found many Chris Marker films that I have not seen and NEED TO: Immemory, a 1997 CD-ROM, and Prime Time in the Camps , 1993. 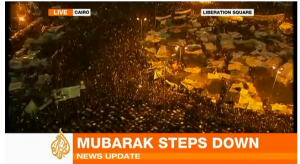 Anger in Egypt – Al Jazeera English.
During the reporting and analyzing, there is always time to make collages.

Don’t expect this from mainstream media. Part must be from truly being on location, on the actual street rather than viewing safely from a hilltop.