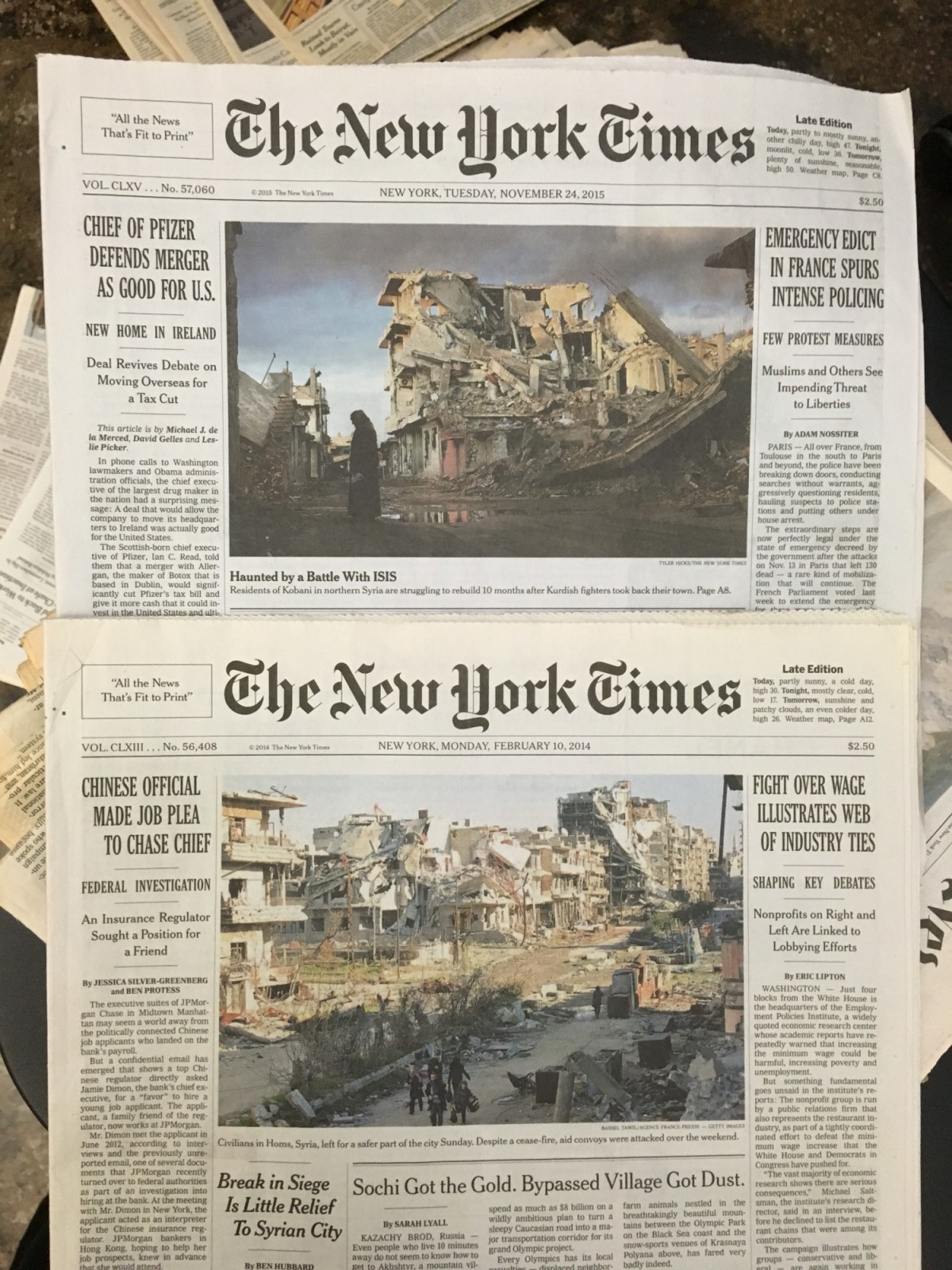 Yesterday I was sorting through the category “Life in Conflict Zones,” and thought I had duplicates in the pile. On closer look, I realized that there were in fact different images, and I was noticing a new trope: bombed-out buildings with small figures making their way in the foreground. The front pages are 4 months apart and the photographs are taken in Syria. Devastating that it is a new normal – I fear that it does not make us look more closely.

I have been resisting instagram for years, but I have taken the plunge. I seem to have a desire around my birthday each year to start a new online project so this year it is instagram. First nolorie to post about my Above the Fold project and other studio happenings. 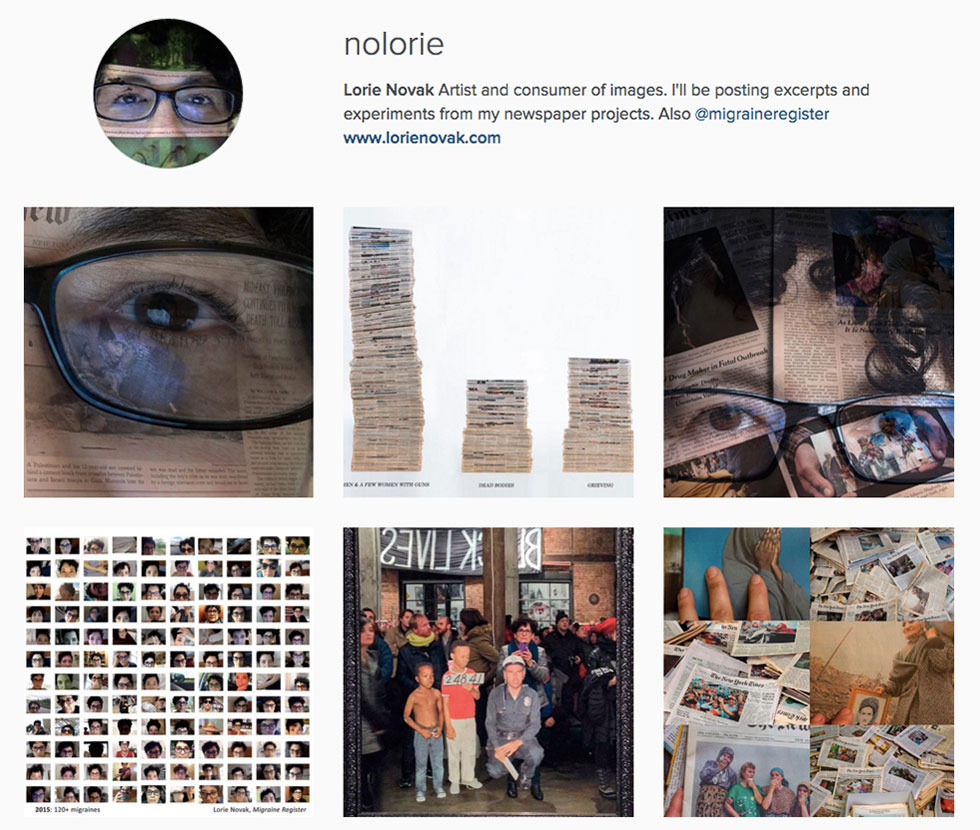 I quickly realized that Instagram is the perfect platform for my Migraine Register project and began @migraineregister. Not because I want to post daily photos, but that I can select images from the project and include short texts. Hopefully it will get the project out there  in ways twitter has not been able to. I see it as also generating ideas for the book I want to do. I’ve been posting images that are part of 100migraines.net as well as newer ones since that project launched 2 years ago on my birthday. 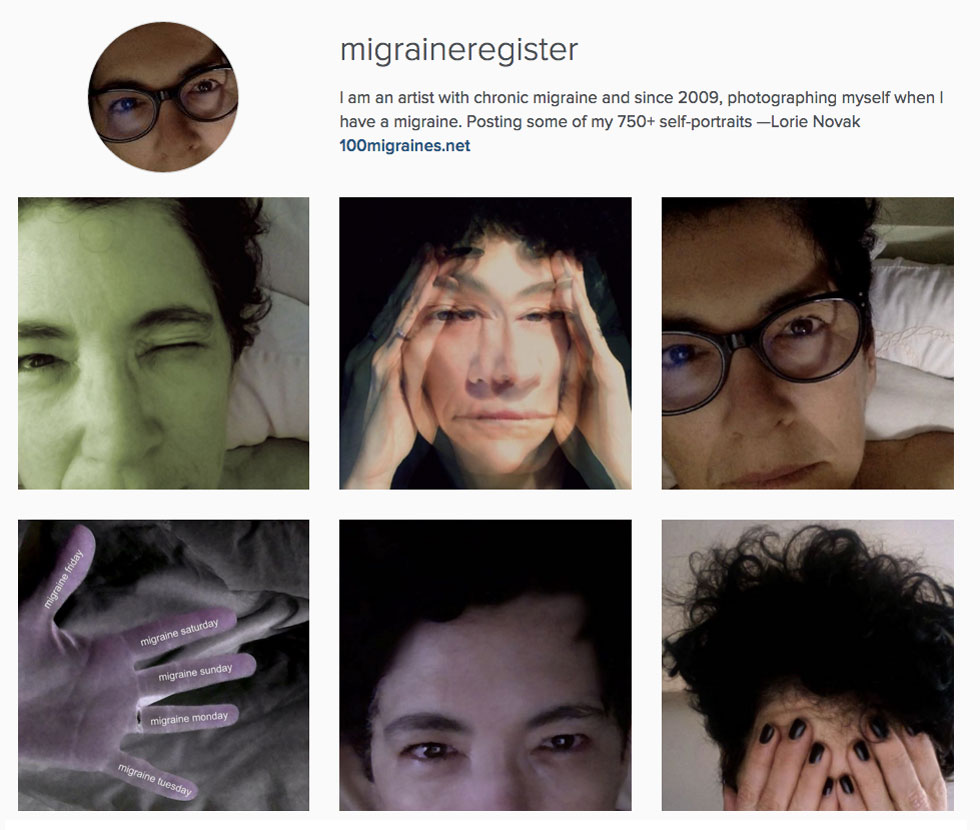 The down side: I have been a little addicted to both feeds, and the one thing I don’t need in my life is more screen time.

Today is my 10th day with this migraine. I am now on steroids – after trying every form of triptan migraine medicine I have to get rid of it as well getting an injection of toradol from my doctor, it is still here. Today it is the worst it’s been.  When I have prolonged periods with migraine like this, I want to work on my Migraine Register project. I even started an instagram account for the project last week. As a result, I have been researching online alot, which brings me back to this piece I made in 2014. Looking at the images of women most commonly used: they have long straight hair, are white, have perfect photoshopped skin, need to touch their temples and foreheads, and don’t look at the camera. I offer an alternative. 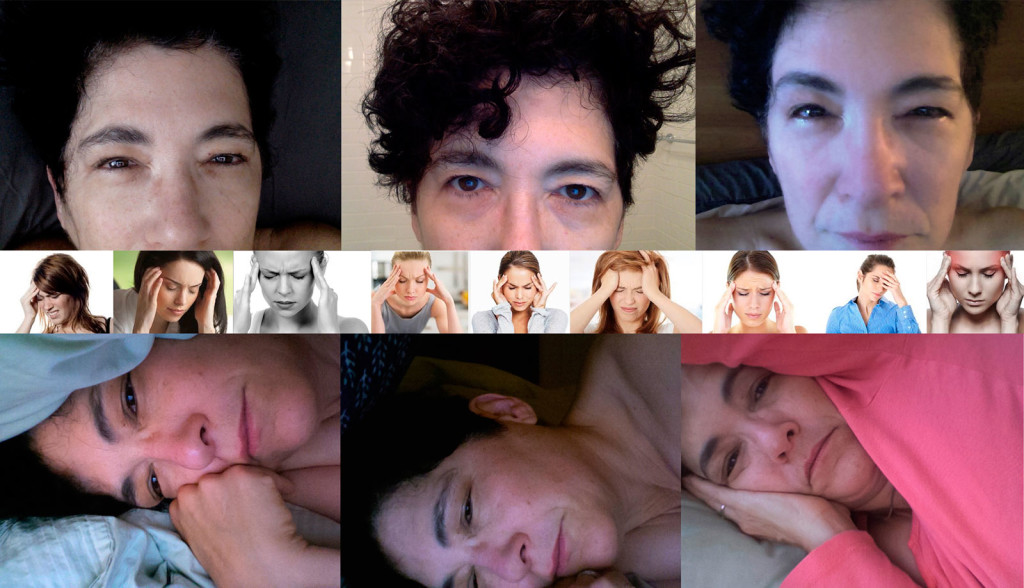 Original text from December 13, 2014:
Over a week with daily migraines. On steroids so can’t sleep. Trapped in my body. Not a pretty picture like the photoshopped straight-haired women with white flawless skin acting out migraines online. Pain is not beautiful.

ABOVE THE FOLD: The front page section of the NY Times from the War in Kosovo in March 1999 to the present sorted according to the image above the fold. Read about the project.

To add to my list of artists making great work with newspapers as material:
Hand-Cut Newspaper Mosaics Slow Down Our Reading

When she approaches a newsstand, Montreal-based artist Myriam Dion often buys 20 copies of that day’s paper — at times, even more than that. 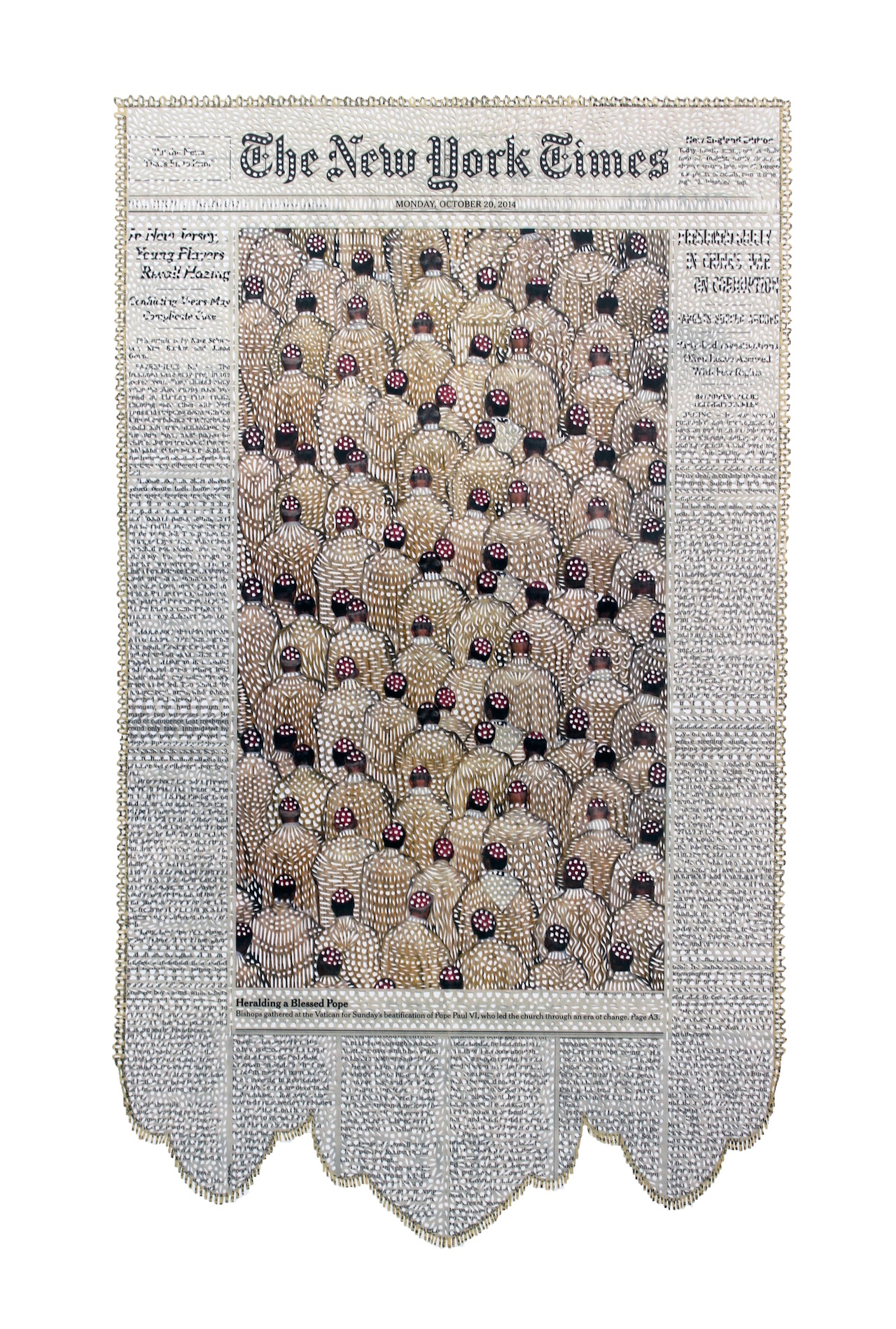 Thrilled to have one of my images advertise the conference: 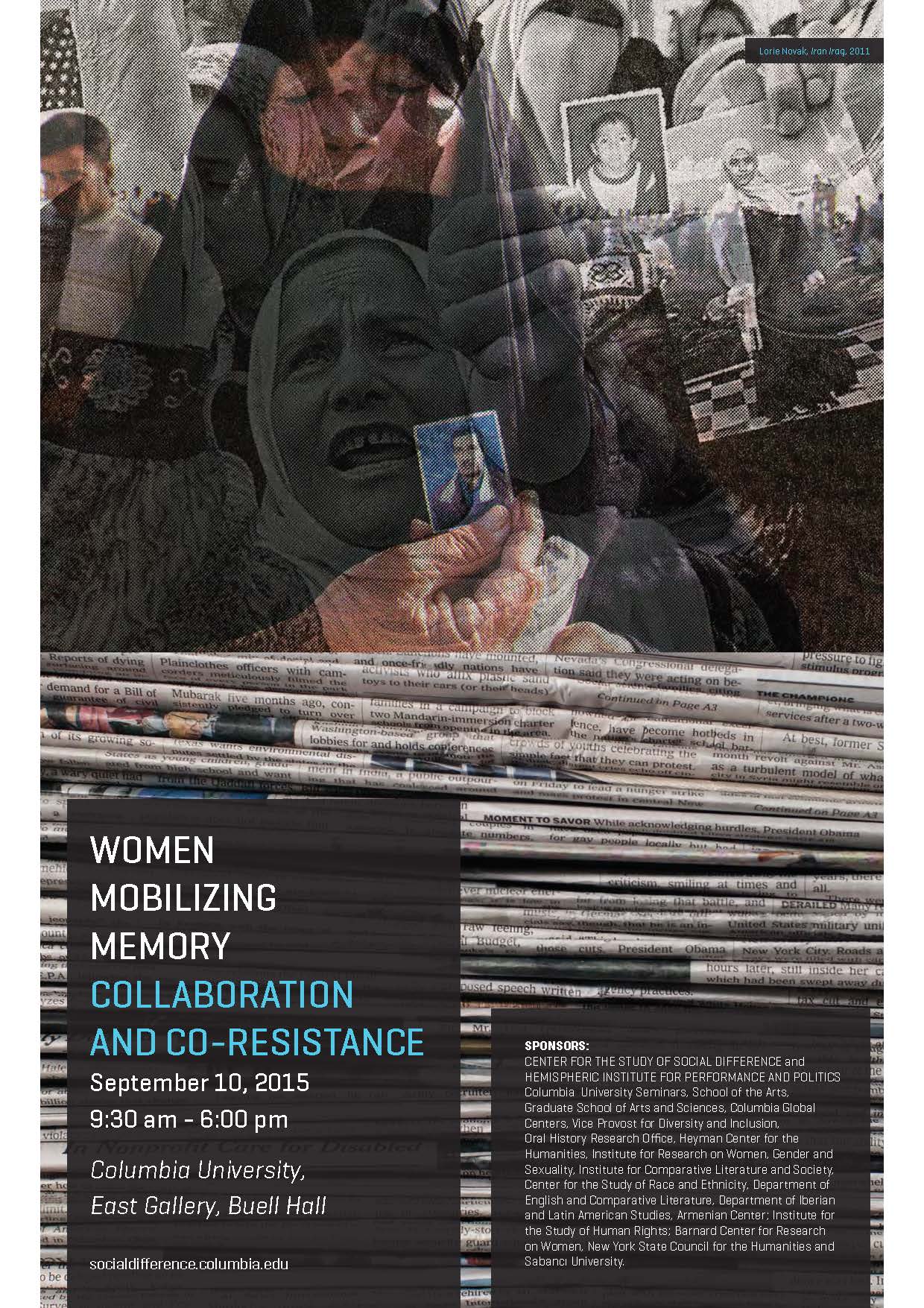 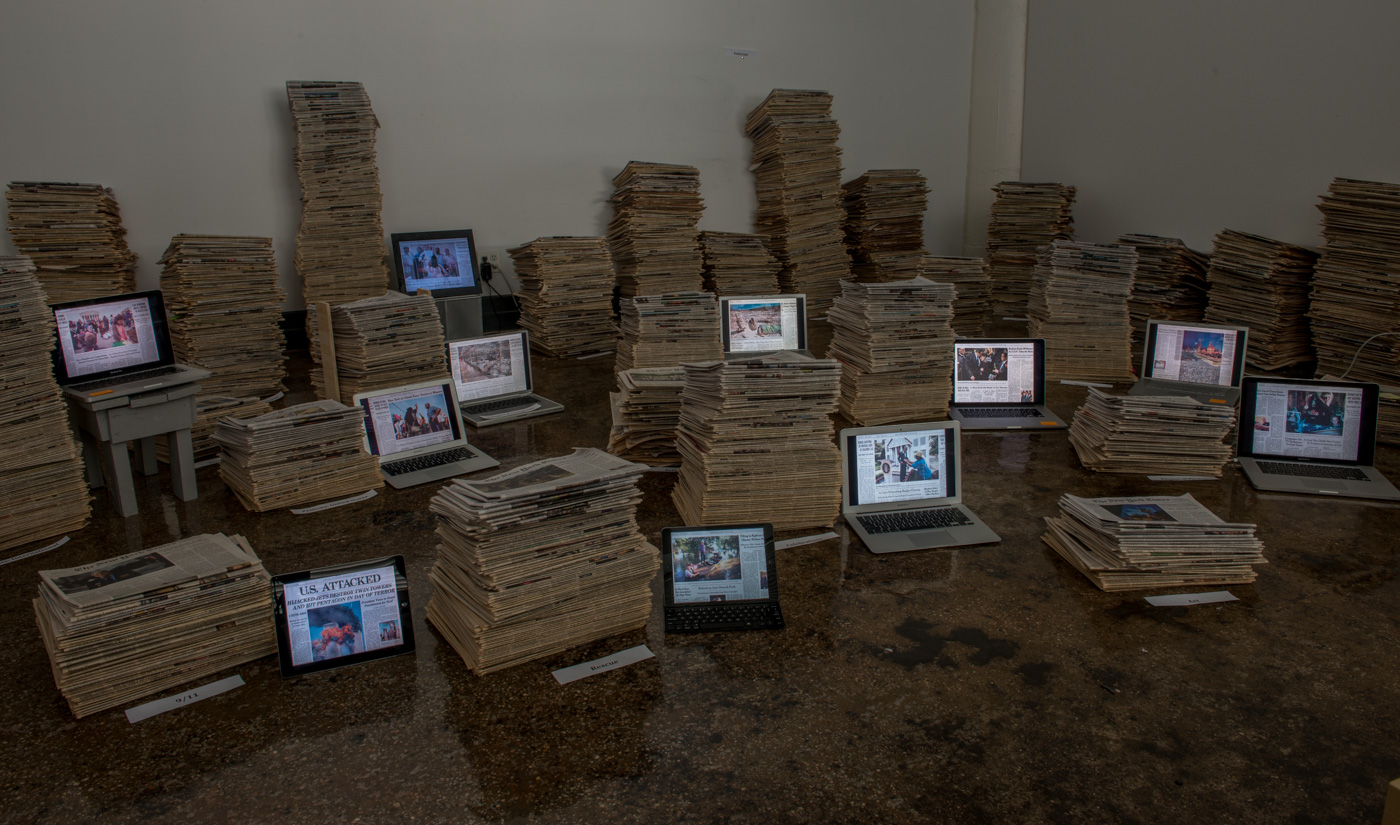 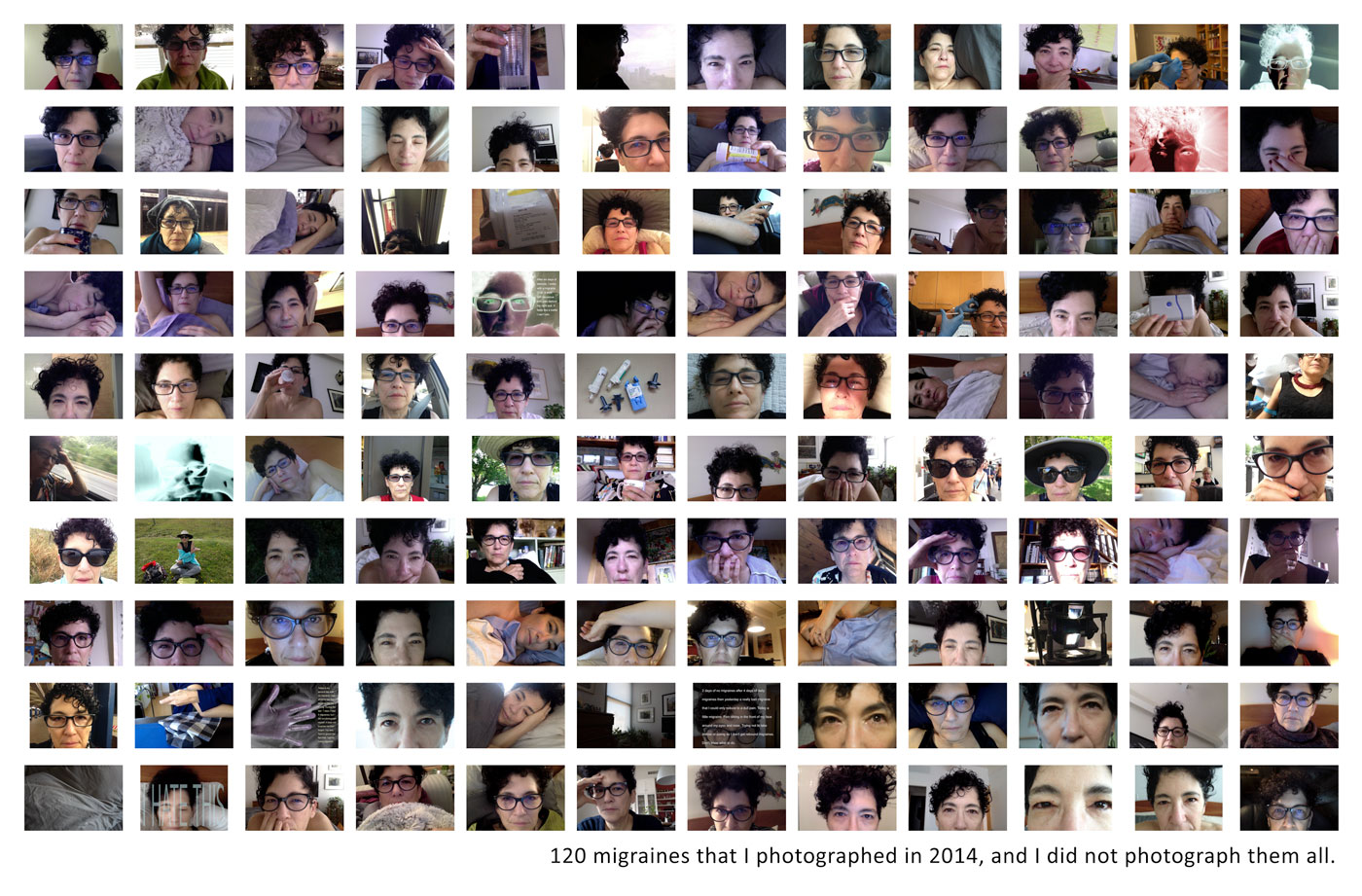 I started photographing myself every time I have a migraine in May 2009 as a way to keep track of how  many migraines I had. I used to count the number between doctor visits, but this was the first time I actually counted how many I had in a year. I am sure that I was afraid to see the enormity, which, not surprisingly, is staggering. 100migraines.net draws from these 5.5 years of photos, and now I know that it contains less than a year’s worth 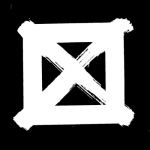 Day Without Art began on December 1st 1989 as a national day of action and mourning in response to the AIDS crisis… In 1998, Visual AIDS suggested Day With(out) Art become a day WITH art, and change the name to Day With(out) Art, to recognize and promote increased programming of cultural events that draw attention to the continuing pandemic. [read more at Visual Aids]

In 1996, I launched Positive Visions, a special section of my Collected Visions web project for Day Without Art 1996 with photographs and stories by and about people living with HIV/AIDS, who have died of AIDS, or who are caretakers of people with HIV/AIDS. The Web was young but was already a site of activism. I remember contacting Creative Time who used to coordinate the online DWA activities. It was very exciting to be able to connect online with people I did not know and be part of something bigger.

In 1997, I collaborated with young people at the Hetrick-Martin Institute, not-for-profit agency serving gay, lesbian, bisexual, transgender, and questioning youth in New York City, to create an online gallery. Each year I would try to collect more stories, but it became increasingly hard to get the word out and there were increasing number of projects dealing with stories around the AIDS pandemic, so I stopped collecting stories for Positive Visions in 2001. 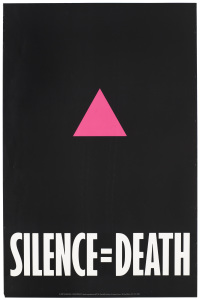 More history and perspective at Art 21 in conjunction with Visual Aids: 1989-What We Lost by Jim Hubbard. 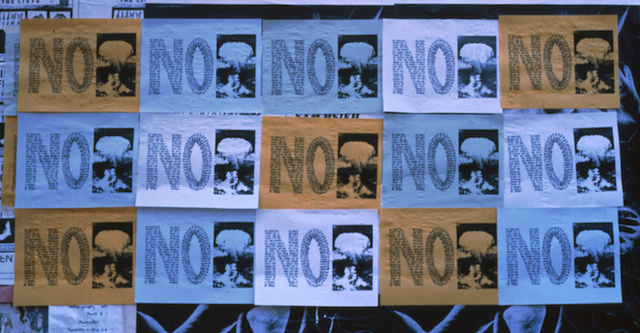 Art in the 1980s: The Forgotten History of PAD/D

Great piece in Hyperallergic about the PAD/D (Political Art Documentation and Distribution) collective and its archive which is now at MoMA library in Queens.

A lot of this was happening when I first moved to NYC. In retrospect, I don’t understand why I didn’t get involved.

I love the last line of the article in how it speaks about why we make archives:  “The archive is in a place that will forever be there, and perhaps no one will show it much attention. But maybe one day, someone will see it, and will.” [by artist Mimi Smith.]

And there is a second essay
with many great selections
from the archive.