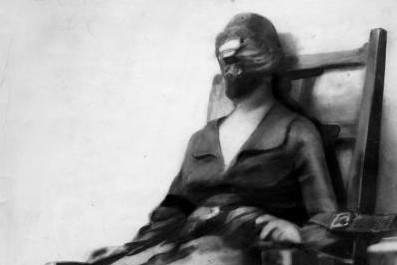 From TIME Lightbox
Interesting story about this famous photograph and timely in that Tennessee is about to vote to reinstate the electric chair. Just voting on it is horrifying enough.

How the photo was taken: The New York Daily News knew that the prison was familiar with many journalists from their staff, so they hired someone from out of town, Tom Howard, a then-unknown local photographer from the Chicago Tribune. Knowing he would never be allowed in with a camera, Howard strapped a single-use camera to his right ankle and wired a trigger release up his pant leg. Remarkably, he was allowed in. From across the room, Howard pointed his toe at the chair and took but one photo as Snyder took her last breaths.

[Read more: The First Photograph of an Execution by Electric Chair – LightBox ]

… In my mind, this image is the one Andy Warhol used for his Electric Chair series, but no.